Ben is extremely knowledgeable and a very detail oriented teacher. He really knows technique and helps me sound my best when singing. - C.W. 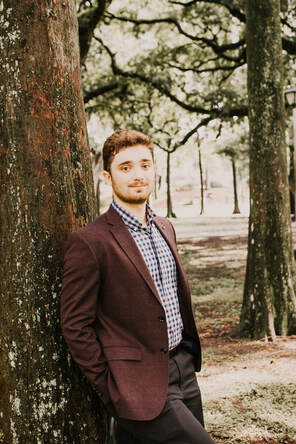 Benjamin Morgan (Virtual Substitute Teacher) is a recent graduate of Louisiana State University majoring in Music Education with a concentration in voice, where he studied classical and musical theatre singing techniques. He has taught children's choir at Broadmoor United Methodist Church for the past three years, been a visiting volunteer music teacher for Southdowns Elementary School, a substitute cantor and music director for the former St. Pius X Catholic Church, and a volunteer “reading buddy” at University Terrace Elementary School.

Benjamin has performed in a variety of locations in Louisiana and Internationally. Some of his recent roles include Daniel Buchanan in Street Scene, Le Théiére in L’enfant et Les Sortiléges, un giovanotto in La Rondine, and a chorus member in Le Nozze Di Figaro. Benjamin assistant musical directed Roald Dahl’s Willy Wonka in the summer of 2019. He has also musical directed Unplugged and A Technicolor Promise with his church choir.

Benjamin was founding Secretary for the student chapter of the National Association of Teachers of Singing (SNATS) and founding president for American Choral Directors Association (ACDA), both at LSU. He is also a member of National Association for Music Education (NAfME). He placed 3rd in the men’s upper division classical voice at NATS Regional Convention in 2018.

When Benjamin is not singing or playing piano, he enjoys practicing yoga.